So as you can see in the video above, I made a nixie tube clock. It looks something like this (infact it looks exactly like this, because this is a picture of it): 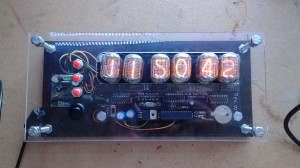 Below is the schematic for the project, as you can see I'm using 6 IN12 nixie tubes, each with it's own 74141 nixie tube driver. These drivers are great! They simply connect directly to the nixies and display whatever 4 bit binary number you give them (if you give them anything above 9 they blank the display - hence why I use the number 10 in my code to blank the nixies). Because they take in a simple 4 bit binary number, I can hook them directly up to some shift registers to drive them, in my case I used 3 74HC595 shift registers (available everywhere), because they can be "daisy chained" together, meaning in the code I only have to write one 24 bit binary number and it will display all 6 numbers on the nixies. Though in reality I split them up into pairs and write three 8 bit binary numbers. 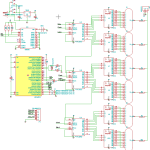 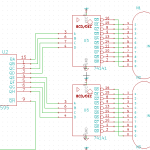 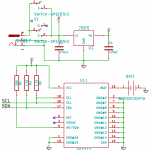 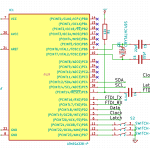 To use the 74141s you need to connect the live pin of the nixies (through a resistor - in my case 1k5) to the high voltage supply, and then each pin to it's corresponding pin on the driver, which can be found on the datasheet. On my board I forgot these 1k5 resistors and had to modify it. My original board had the live pins going straight to the supply, so I had to cut that trace on the board, and botch in some resistors to each of the tubes, the result is below: 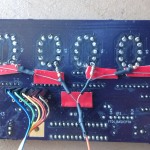 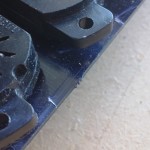 For my main chip I'm using an ATMega328P (the same chip as is in the Arduino Uno), and I'm running the arduino bootloader on it so I can program it in the arduino language - just to make things simpler. 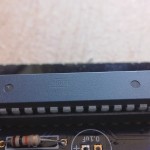 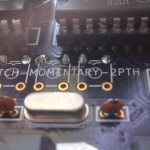 It is interfacing with a DS3232 real time clock chip, which I would highly recommend! It is a great chip which holds hours, minutes, seconds, year, month, date, day of the week (all of which are adjusted for leap years automatically) and it has a tonne of usable SRAM inside it. It's also really really accurate, with a temperature compensated crystal oscillator inside the chip, and fairly easy to interface with (though early on I had some issues - I think it was too much capacitance on the line as I was testing it with cables plugged into the chip socket) over I2C. The only downside I can see is it only comes in a SMD package, which I know some people don't like soldering. Unfortunately I don't have a picture of it, as it's tucked underneath the coin cell battery holder.

For the high voltage supply I simply ordered one of eBay, as it was simpler and cheaper than designing my own! The one I used was this one. 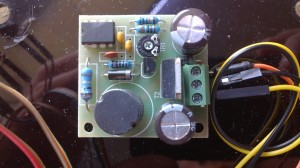 For the case to my project I laser cut an acrylic front and back and used some chunky nuts and bolts I had lying around to hold them together, as well as to hold the PCB in. 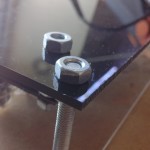 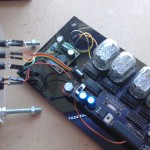 As mentioned in the video, there is a bug free board available on OSHPark if you want to order my board and build this yourselves, and all my code is up on github, links in the banner to where you can find all that!