So a while ago I bought an old Vacuum Florescent Display tube, and attempted to build my own controller for it. Well I’ll keep that story brief but it doesn’t need saying that I failed dramatically, and blew about £60 on it ($96).

But I didn’t give up and a couple of weeks ago I bought myself an awesome little board from OSHPark. Built by a user named ‘Awesomenesser’. Unfortunately I have no means of contacting this person but I would sincerely like to thank him/her for making this awesome little board. 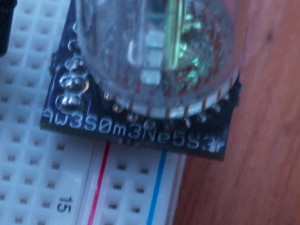 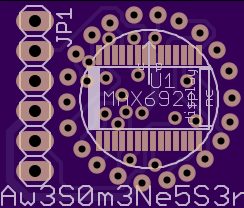 The board itself uses a MAX6921AUI. Which is a VFD controller chip made by maxim integrated. This chip is absolutely awesome so if you are thinking of doing a VFD project really do check it out!

Unfortunately the board was supplied with no instructions so I sat down for a while and compared data-sheets until I had something that made sense. Now I don’t want you to have to do the same thing so I thought I’d do a little picture and you can see for yourself how it goes. 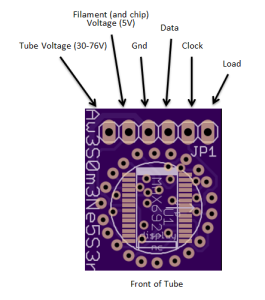 Some of you who know a thing about VFD tubes will know they run at high voltages, between 30 and 80 gives you a good bright light (though make sure not to exceed the 76V rating on the chip). So you may be wondering how I generated this. To do this I used the HCJ-IPM-V5 DC-DC step up converter, I would highly recommend this solution for anyone wanting up to 30V DC, simply because it is SO easy and simple and still very cheap. 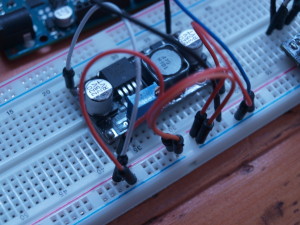 I also used a DS1307+ chip, to keep the time, with a 32.768KhZ watch crystal and a simple 3V coin cell to keep it running when off. I used a really useful library called RTCDue to interface this chip with my Arduino Due, though I plan on eventually running it on an ATMega328PU, in which case I will use this DS1307+ library from Adafruit.

And finally I used the Arduino Due to run the show. My code is available on gitHub so take a look if you are looking to interface with the MAX6921 chip! The library I use is specifically for the arduino Due, but if you change that the code should work perfectly on any other arduino!