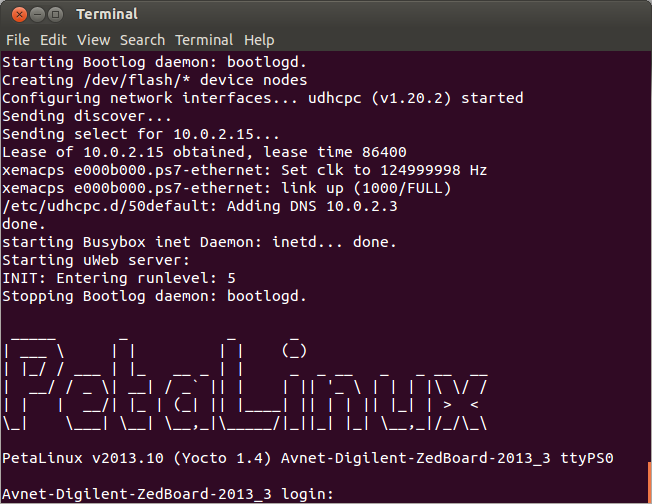 (You don’t need to read this: to get to the tutorial just scroll down a bit)

I work in R&D, in a small team, and the work I do crosses the boundary between hardware and firmware, as many Electronic Design Engineers experience. In the course of this work I’ve found myself tasked with a reasonably large FPGA project: the final goal of which is to run some custom programmable logic alongside an internal processor, with embedded linux as an OS. That’s the brief (in brief).

Okay, so there are 3 different things at work here: the programmable logic itself, the embedded linux OS, and the application firmware which will eventually run on that OS.

In order that work can be completed on all 3 of these sections simultaneously, and to avoid a workflow primarily focused around emailing each other zips of entire projects (yes, this happens), it was obvious that we needed source control. Oh, and throw into the mix that the team primarily uses Windows to do it’s development, and going in and out of VMs all the time – as most Petalinux projects seem to – is a frankly awful workflow.

So what’s the solution here?

Okay so if you’re following this tutorial I’m going to assume the following:

We’re using the Xilinx Zynq SoCs, and the obvious choice of embedded linux OS for these absolute *beasts* is Petalinux – what a shock, it’s in the title. But Petalinux is a temperamental child which will throw it’s toys out of the pram at the slightest inconvenience, and thus we need to make sure it’s happy. The prep begins:

Yes, it’s annoying that this has to be 16.04 LTS, especially if you already have WSL enabled.

No, there’s nothing you can do.

No, it doesn’t work on later versions of Ubuntu.

The instructions for installing WSL can be found here.

Follow the manual installation steps as far as choosing your linux distro, then make sure you choose 16.04 LTS.

Fire up WSL and run the following commands -

Link your downloads folder (this will come in handy later):

Install all the (many) dependencies:

In WSL, copy it from your windows downloads to it’s own folder:

In WSL, run the Petalinux installer and accept the EULA’s:

Step 6: Edit some language parameters because yes this is necessary

Change your language to be US English, if it wasn’t already:

You need to do this every time you boot WSL, or add it to your .bashrc

Congratulations! You have the Petalinux tools installed on WSL… now to actually use them for something.

Assuming you’ve done everything right in part 1, and the Petalinux gods are with you, this part should go without a hitch. Right?

This isn’t actually necessary, but I like it because it keeps things clean:

In our case this will be called “wsltest”, and as I’m using a zynq 7015 it will use the znq template, but you can use a bsp or another template here.

This should create a directory in your projects directory called “wsltest” in which the project will reside.

In this step you need to hand your petalinux project a hardware description, which in my case I created from Vivado in that directory we linked earlier.

This should then give you a menuconfig like this: 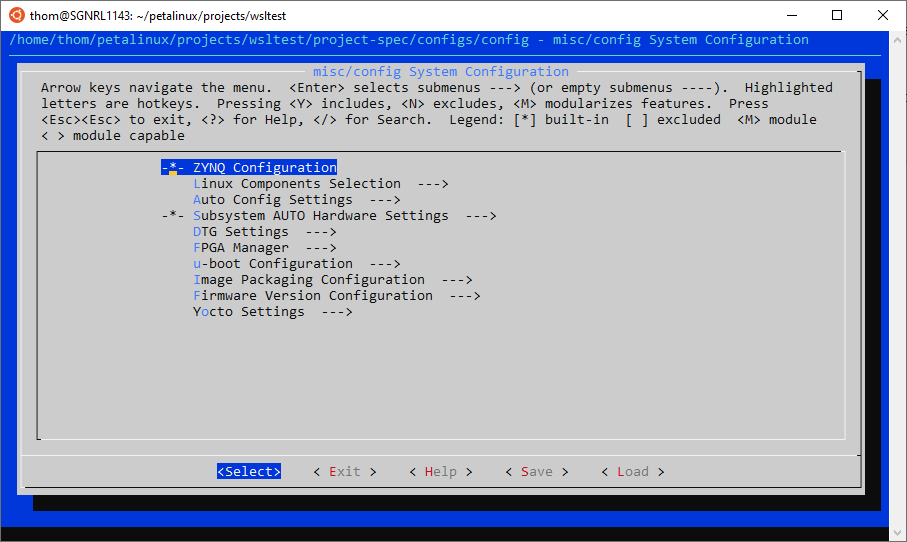 You don’t need to change any settings here, but I like to give my projects a static ip to make connecting to them with ssh easier down the line. 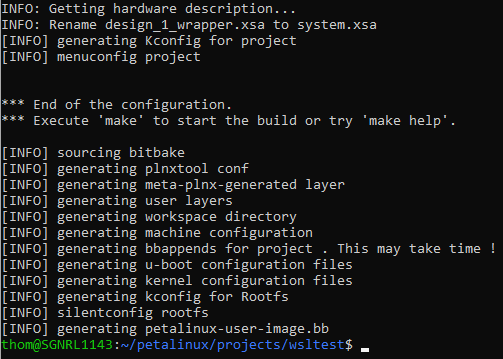 It may seem odd to have to configure it again, straight away, but this is actually a different configuration menu, dedicated to the contents of your linux build.

On this command you should see a screen very similar to the last, but with different options: 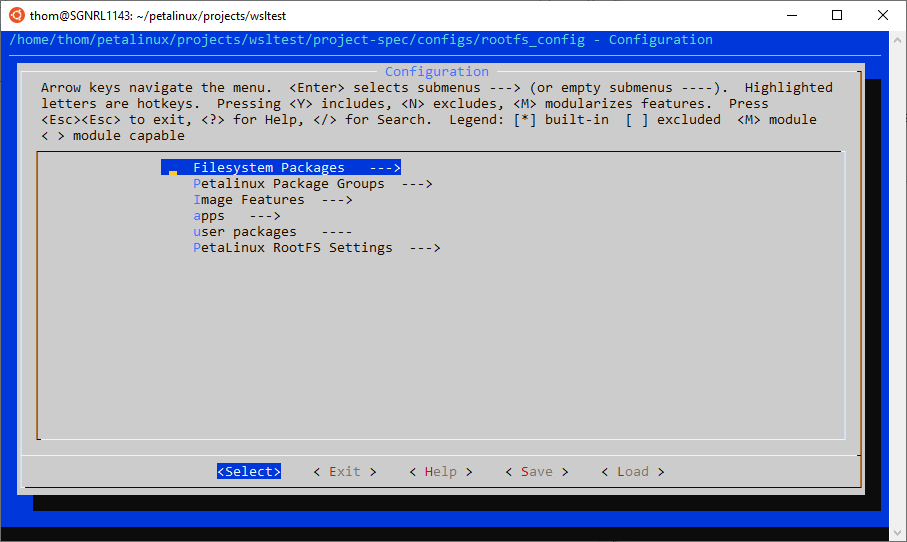 For this system I’m going to use dropbear, so go into:

And enable the option by selecting and hitting ‘y’. I’m also going to enable Python:

Save the config and exit.

Moment of truth…. Does it build.

If all is well you should see something like this:

This will take a while, so be patient!

Once it’s done you should see a success message, don’t worry if you see messages about a tftp directory.

Step 6: Check it runs on qemu

Qemu is an emulator packaged with petalinux on which you can test your builds, to do this run the following:

If all is well you should see a bunch of text as the kernel boots, followed by (finally) a prompt to log in. This may take some time so don’t worry too much if it does! 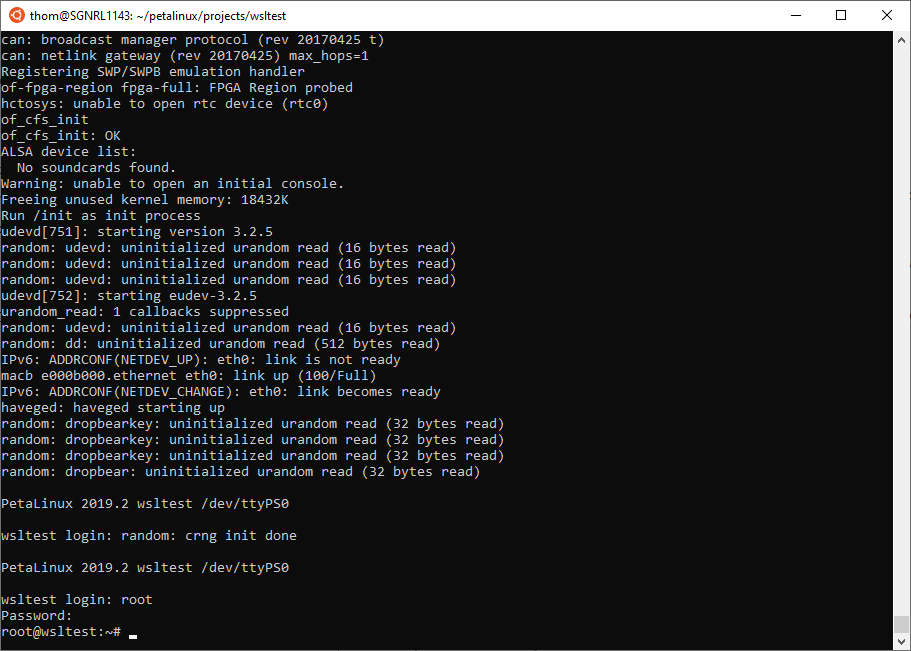 To test this we are going to initialise python and run a simple command:

You should see the following:

Okay, so up till this point, we’ve mostly been just following bog standard stuff but using Ubuntu on WSL rather than a VM. But we want to do use Vitis on Windows for our development? So how do we go about this?

I’m going to be using bitbucket as my git host, but you can use github if you so wish.

Step 1: Build the project again, this time for an sdk.

This will build and package up all of the relevant files needed to build applications which can run on our petalinux OS. Note: this takes a while…

This will package up the sdk into one convenient location such that we can transfer it to windows and get developing.

Step 3: Ironing out the OS issues

So we’ve now got an sdk ready and waiting inside our images/sdk directory, so just dump this all in VC and crack on right? Wrong. There are some frustrating habits that Petalinux can’t give up which make this impossible:

Okay, so we need to make a copy of this sdk subdirectory with symbolic links replaced with actual files, and no duplicates. Where duplicates exist we need to pick the one with the lower case rather than the upper case. Oh and as a small gift from the petalinux gods we only need 2 of the folders from the overall sdk: usr and lib.

The solution is to use the .gitignore file, which will become relevant when we turn this project into a git repo. The plan of attack goes like this:

Now, DO THIS EVERY TIME YOU REBUILD AND REPACKAGE PETALINUX:

To make all of this easier in future, I made a script which you can download and sit in your project root, which you can simply run every time.

Make sure you change “cortexa9t2hf-neon-xilinx-linux-gnueabi” for your cpu build.

Step 4: Copy the wrapper to the sdk directory

You’ll need the design wrapper for the project generation later down the line, so copy it to your sdk directory now:

Okay so if you did all of the above successfully you should have a .gitignore file in your root directory full of duplicate files, and the following content:

Edit this to remove *.o and allow us to check in the object files necessary for building, you may need to change the file permissions with the following command:

You should also edit the images/linux line to:

We’re finally in a position where we’re ready to go! Make the git repo with the following command in the project root directory:

Followed by the following:

Then hook it up to whatever remote takes your fancy and push it! Voila, the project is now in git.

Part 4 - Setting up the windows project

So now we have the ability to pull ourselves a fully formed sdk on which to develop, it’s time to make the project. There are 2 things to do here:

Because of the way Vitis is organised, both these things need to happen! However, we only really want our application source files to be under VC, everything else is just eclipse based fluff? So we’re going to aim for the following:

The advantages of this is that the project is not always checking in and out huge quantities of files, and the files under VC have ­NO BEARING on an individual computers setup.

On windows I like to use sourcetree to manage my git repos, but you can use whichever VC gui you like.

Step 1: Create a git repo and clone it to your windows machine

I’m not going to tell you how to do this, I’m sure you already know if you’re reading this article.

Step 2: Add your petalinux repo as a submodule

Again, this is tool specific, so go ahead and add it however you see fit.

Step 3: Create a folder with your application firmware name, and a folder inside that called src

Save this as “helloworld.c” inside the src folder. This is a placeholder to show you how generating a project around sources that already exist works.

To do this, we’re going to use something called XCST, which is a command line interface to the Xilinx tools. We can execute XCST commands via a .tcl script.

The tasks we need to complete with this script are as follows:

All of which I’ve conveniently packed in the following script for you:

Place this inside the project repository, and name it “generate_project.tcl”.

Alongside this, make a batch file (whatever name you like) which contains the following line:

This will allow us to execute the tcl script to build our project.

You’ll notice that the tcl script references a .bif file, which we have yet to create.

The bif file lays out the various components of the boot image and where they’re placed, more info on this can be found here.

Create a file of the required format and populate it with information from your project, for reference, here’s mine:

Once this is done, you should be ready to generate your project.

Run the launch.bat file, and check that the tcl script executes successfully. If it doesn’t check the file paths are correct.

Note, you may experience warning messages about files failing to copy, if so, it’s because the file path to those files is too long. The boost::filesystem::copy_file method which Vitis uses to copy these files has a 240 character limit on file names which can easily get overrun if the project is too deep into your file system.

When the process is complete, you should see something like this: 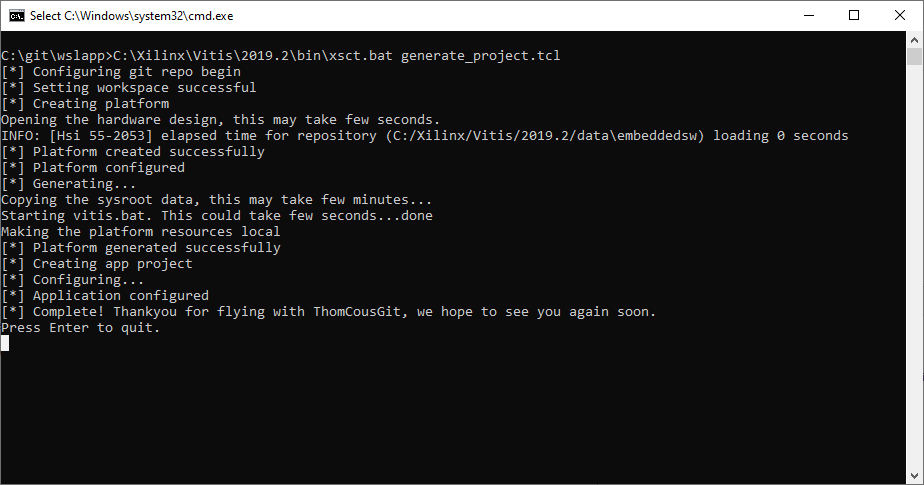 You can now open your project in vitis. Start vitis and when prompted to select a workspace, navigate to your repository and select there. A workspace should be set up in that directory waiting for you, with your firmware project located in that workspace.

Navigate to that project and click build, it should build successfully! 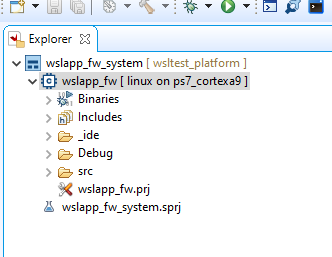